Ok so a little bit of a false alarm. I didn’t think I was going to have any easy access to internet let alone from my own laptop but turns out my host has wireless internet and the first thing I thought?

Sweet, I can blog during down-time ♥

So here I am in beautiful Portland, Oregon. I have jetlag of +3 hours so I was wide awake on my vacation at 6:30am. Unfortunate but this gives me time to blog while my host sleeps in so it’s a wonderful thing! :]

I know this is off-topic but my flight from Detroit to Portland was hell. I had a great window-seat exit row but had an extremely obese woman sitting next to me and her muffin top was spilling over the arm-rest and into my seat. Not only that but she kept wanting to look outside the window and mercilessly leaned over me to do so. Couldn’t breathe! Although I’m used to flying 9+ hours on a plane back and forth from Tokyo to Seattle, this flight of a mere 4 hours seemed never ending. I’m sure you guys have had horrible flight experiences. Just thought I’d share.

The most amazing thing that happened to me yesterday apart from the fact that I’m back home and spent the whole day with best friends, it was when I was scrolling down the comcast remote and when I selected “MLB Baseball“, it was the Mariners vs Royals game. Wow, how nice is it to be able to watch your favorite team on TV without having to log into GameDay or paying for MLB Extra Innings? Wow I’m going to be so spoiled for the next month. Sounds ridiculous I’m sure. :]

I didn’t watch the entire game; I actually started watching in the top 4th and the Mariners were down by 1. Rowland-Smith was our SP and definitely didn’t do a repeat on his last start where he went hitless for 6 innings. He struggled by giving up 5 runs within the first 4 innings and he was done. As I’ve mentioned before, the Mariners relief pitchers make me extremely nervous but Kelley, Batista and Lowe did a great job. Kelley gave up the 6th run to the Royals but ended up with the win. Aardsma came out to close the game and succeeded despite loading the bases for himself.

He had a little help from Ichiro. He blasted a homerun in the first inning, went 2 for 5 with 3 runs, but the biggest oomf that saved the Mariners was this…….

In the bottom 9th with 2 outs bases loaded, Buck hit a slicing foul ball towards right field, right in the corner where absolutely no one but Ichiro could see. It was quite a long dash for Ichiro but as soon as the ball dropped, we saw a blow of dust and a glove rising from the corner. Ichiro had caught that insanely difficult catch and rescued Aardsma from a blown save. Ichiro isn’t an 8 time Gold Glover for no reason, huh? I wonder if he was on the Web Gems last night? He should’ve! He’s amazing!

We definitely can’t forget the man that gave the Mariners the one run lead which ended up to be the only one we needed. 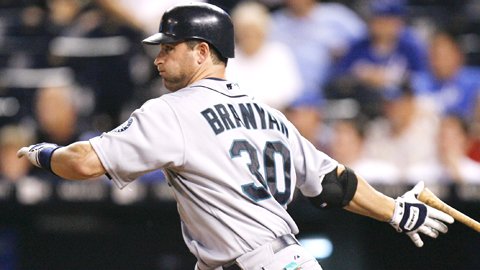 Russell Branyan! He’s been in a little slump as of late but turned that around for himself and for the team last night. Branyan hit a line drive between Butler and Callaspo scoring Jack Wilson. Branyan went 2 for 4 with 2 RBIs. Good job, Russ! :]

As far as watching the game (on TV, yay!), it’s always been so fun to watch the Mariners take on the Royals because of all the former Mariners players that they’ve acquired throughout the years.

They were all great players for the Mariners and it’s always so nice to see their smiling faces. Not only that, but Olivo and Yuni both went 2 for 4 last night scoring half the runs that the Royals produced.

With all that said, I’m happy I managed to write up an entry this morning. Busy day ahead but turns out my friends are having a party for me at Buffalo Wild Wings where they have TVs in every corner, and at 4pm which is exactly when the Mariners start.

Am I completely ridiculous and horrible for thinking that?

I have to admit, I was more than surprised with last night’s win against the Toronto Blue Jays for three reasons:
1. Rowland-Smith. Whaaaaaaat? Didn’t give up a hit till the 7th inning? We haven’t seen him in so long we thought he’d be all rusty and definitely no match for the Roy Halladay but he came through for us! Rowland-Smith gave up 3 hits and 2 ERs before handing the ball over to Lowe, then Aardsma. 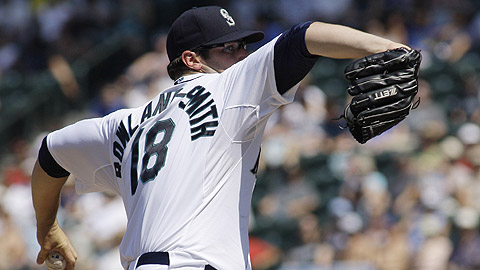 2. Griffey! He went 2 for 4 and his double in the bottom 7th won the game for us. Mariners fans are torn (at least the realistic ones) because we’re so glad he’s back in Seattle but we’re also a little bummed that his batting average is .215. I know, I know, it doesn’t look right when he’s batting anywhere else on the lineup but the cleanup position but we can’t afford to have a .215 batter there. Actually, I’m going to shut up because I’m talking about last night, and last night Griffey was the star. Despite my negative ramblings about him, a part of me adores him and is so glad to see him back. ♥
3. Lopez. He’s been laying low lately…(maybe he’s sad his partner in crime Yuni [Betancourt] s gone?) but he went 3 for 4 with one of them a solo homer.
Now for what wasn’t surprising:
1. Doc, aka Roy Halladay was that good. Honestly, it was just an honor to even watch him pitch what could have been his last start as a Blue Jay (hopefully not but who knows?). The Mariners had 11 hits but ended up with only 3. That’s good stuff right there. Besides, Halladay just had two bad pitches which most of the time you can get away with, and it’s rarely costly. Unfortunately this time around, it was the latter for Halladay and the M’s definitely got lucky.

“He’s good. They don’t call him Doc Halladay for nothing”- Ken Griffey Jr.
2. Ichiro went 2 for 4 with 1 run raising his average to an amazing .368. Will he ever stop? I’ve seen Sports Center, FSN and ESPN talk about how “old” he is and how he’ll be slowing down but I don’t see that happening anytime soon, do you?
3. Aardsma. Our closer is having to work a lot lately but he definitely doesn’t show it. He picked up his 25th save out of 27 opportunities. Nice.
All in all, this series against the Blue Jays was one of those series you can be proud of winning. Yes, they’re 4th place in the AL East but that doesn’t translate over to how great their team is. Lots of talented players and such a great skipper. We’ll be looking forward to seeing them again at the end of September!
♥♥♥♥♥♥♥♥♥♥♥♥♥♥♥♥♥♥♥♥♥♥♥♥♥♥♥♥♥
Trade Talk: 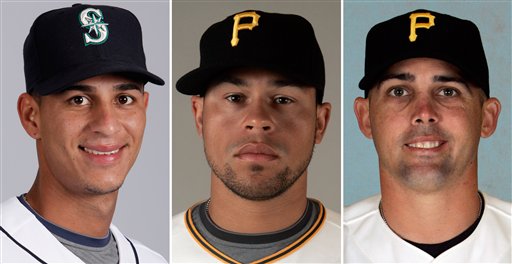 Just a personal opinion, but I will miss Ronny Cedeno. As far as I know, he was an extremely amiable guy and reading about how he was in tears in the clubhouse after the news came in, makes me want to cry too :[ Sure, he was in a 0-26 slump and this is the baseball business, but his hard-working, positive attitude and huge smile really came across to us M’s fans. Good luck in Pittsburgh Ronny, we’ll miss you!
With all that said, welcome Snell and Wilson! It’s definitely good news that we’ve finally acquired a solid short stop!
♥♥♥♥♥♥♥♥♥♥♥♥♥♥♥♥♥♥♥♥♥♥♥♥♥♥♥♥♥
Toodles,
xoxo